Lawyers have faulted the recent directive by the National Broadcasting Commission (NBC) on the abolition of self-carriage status by broadcast entities, saying the 2014 Digital Switch Over Whitepaper the commission relied on to issue is an expired document and lacks the force of law.

Ahead of the commencement of the second phase of the DSO programme, which has proceeded in fits and starts, including two unmet deadlines, the NBC recently directed digital terrestrial television operators to reconfigure their transmission set-ups and transfer their carriage to either ITS or Pinnacle Communications Limited, the licensed signal distributors, with immediate effect.

The NBC, in a letter signed by its acting Director-General, Dr Armstrong Idachaba, said its directive on abolition of self-carriage is Section 10 of the 2014 DSO Whitepaper, which it said prescribes the splitting of broadcasting activities into content distribution and signal distribution. The commission stated that with the split, a single broadcaster can no longer combine the functions of content carriage and signal distribution.

Reacting to the directive, Lagos-based lawyer, Marian Igbi, said the NBC erred by presenting the DSO Whitepaper as a document with the same force as a law. She contended that the Whitepaper, issued in 2014, can no longer be deemed as valid, given that two editions of the National Broadcasting Code, a subsidiary legislation on broadcasting, were issued after it. 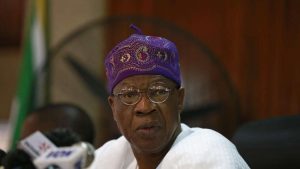 Lai Mohammed has revealed why the FG is kicking against exclusivity sports broadcasting.

“It is important to realise that the 5th and 6th editions of the National Broadcasting Code came into effect after the Whitepaper.

The Whitepaper the NBC relies on as empowering it to issue the directive gave no effect to the document’s recommendations. As a matter of fact, it could not have given any effect to it in view of the fact that the National Assembly has not yet amended the NBC Act,” she argued.

Speaking in a similar vein, another lawyer, Maxwell Ogbeche, noted that a Whitepaper is simply a distillation to supply an analysis of a particular subject, including new policy frameworks, but is not the equivalent of a law.

“Whitepapers are statements of policy directions. They are not laws and their recommendations have to be worked into actual legislation to have any binding legal effect. In this case, the recommendations of the DSO Whitepaper remain unknown to the NBC Act and the Broadcast Code, both of which are the bodies of laws regulating broadcasting in Nigeria. There is no other legislation,” he said.

Also speaking, Timothy Shaba, lawyer, and former broadcaster argued that NBC appears muddled. According to him, the NBC Act and National Broadcast Code are clear on broadcasting functions that require license issuance, saying DTT operators at which the Commission’s directive is aimed have valid authority to distribute the signals, comprising DTT service.

The Voice Nigeria 3: All the titbits with Falz, Waje, Yemi Alade ...