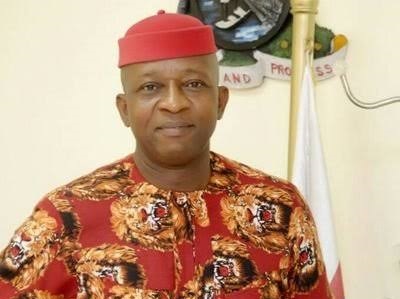 Hon. Jude Idimogwu of the Lagos Assembly has emerged as the leader of southeast members of the All Progressive Congress, APC, in Lagos.

On Thursday, May 14, the Lagos State House of Assembly lawmaker was made the leader after he was endorsed by the Eze Ndigbos in the state.

The Chairman House Committee On Wealth Creation was unanimously endorsed by all the Eze Ndigbos in the state at the state Secretariat in Surulere, Lagos.

Idimogwu, a representative of Oshodi/Isolo Constituency II, explained that the Ohanezes felt Igbos were marginalized by some people who claimed to be leaders of Igbos in the state, hence his emergence as the leader with the interest of the Igbo people at heart.

“The truth is I have not been happy with the Igbos performance in APC in Lagos State, especially during election.

“Every success of a party lies in the leadership. I know quite well that the position is for me. Now, I’m ready to take the bull by the horn. Most Igbos tend to vote against our party because the leadership doesn’t reach them on time.

“My people are very proud people who are self-dependent and cannot be lured or bribed. Now is the time to win them over by giving them reasons they should support the party and not wait till election is close before we go to them and win them over,” said Idimogwu.

Continuing, Idmogwu said “now that I’ve emerged as the Ndigbo leader I am particular about sacrifice because that is what leadership is all about. I am ready to sacrifice for my people and I’m here to protect their right.”

“I also want them to know that nothing goes for nothing. They should obey the laws of the land because we are strangers in the land and we do not argue with the fact. We also have to thank our in-law the Yoruba who are very accommodating.

“You can’t be progressing in a State and not support the ruling party. I have their interest in mind, their welfare and concern is what I have to interfere with the government and also they should expect something from the government as well.

“This is why you need leaders that are accountable and open minded, who put you first before any other thing. If I leave the State today I will return to the Eastern State that is the more reason why I should make sure they are protected.”