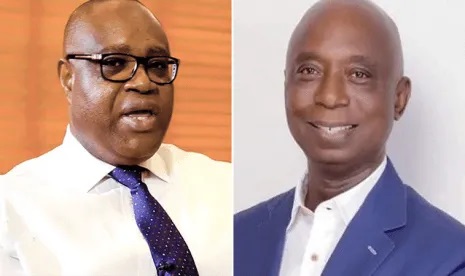 Açcording to recent reports, Ogbechie, the Chief Executive of Rain Oil was on Friday, December 4, arrested over an alleged assassination plot against Nwoko.

In a report by LagosCityReporters, Nwoko, the Inspector General of Police, last week, was alerted about a hatched plot in Kuje prison to assassinate him over the Idumuje-Ugboko murder and terrorism trial.

Ogbechie is from Onicha-Ugbo and not Idumuje Ugboko as it is poised to state. However, the two have been locked in the battle of who takes over the soul of Delta State.

Nwoko had in the open letter urged the police to unearth the sponsors of those allegedly plotting to harm him, according to the source.

Dr Ogbechie who was still in police custody as at 5pm on Thursday hails from Idumuje-Ugboko in Aniocha North Local Government Area of Delta state and is reported to be a friend of Prince Ned who is also a native of the same village.

Dr Ogbechie and the Prince reportedly parted ways over the kingship tussle in the Nwoko Royal Family , a dispute that led to mayhem in Idumuje-Ugboko between May 18 and 25, 2017, where many supporters of Prince Ned were attacked with two people, Cyprian Kumiolun and Kennedy Iloh murdered.

Some of the alleged hoodlums involved in the Idumuje-Ugboko attacks are now facing trial for terrorism and murder at the Federal High Court Abuja under Justice Okon Abang.

Dr Ogbechie is a supporter of Prince Chukwunonso Nwoko, one of the claimants to the disputed Idumuje ugboko stool and also among the accused persons in the terrorism trial, implicated to have imported the hoodlums that wrecked havoc on the village in 2017.

Billionaire Harry Akande passes on at 77 after brief illness