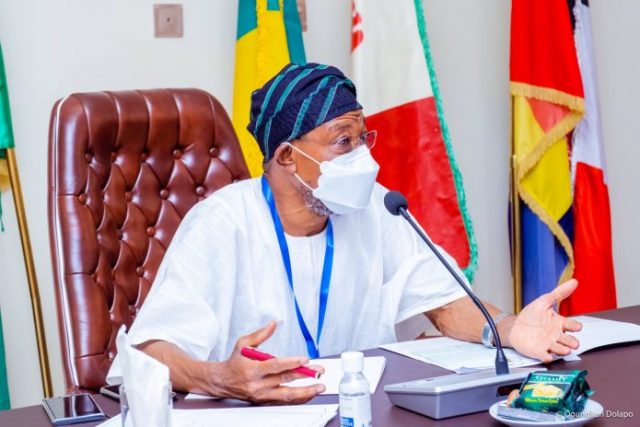 The Federal Government has urged Nigerians who wished to apply for international passports to always follow due protocol and refrain from patronising touts.

It said it has digitised payments to make the process seamless and stress-free.

Minister of Interior, Rauf Aregbesola, gave the warning on Monday in Ibadan, the Oyo State capital, during the rollout of the Enhanced e-Passport with Polycarbonate Data Page and other security features.

The minister, who said the government is aware of what the people go through to secure the document, said many people in their bid to beat the system patronise touts.

Aregbesola said: “Part of the reforms is the migration of passport applications and payments to digital platforms.

“But we regret to observe that applicants still patronise touts and unscrupulous officials in the hope to beat the system and get expedited services. When they were disappointed, they came to report to us. Of course, we have zero tolerance for corruption and subversion of due process. We, therefore, take any such report and invoke the necessary disciplinary measures. But I will implore applicants to stop patronising touts and our officials directly.

“Follow the process we put in place. Apply for passports and pay online. The only engagement with our staff is the enrollment of your biometrics. Patronising touts and passport office officials doesn’t always end well, but rather serves to defeat our purpose of eliminating corruption and infusing integrity to the passport administration process.”

On the new application process, the minister noted that a new timeline has been set for fresh passport application and reissue.

“Our template stipulates a maximum six weeks for obtaining new passports and a maximum of three weeks for renewal. We work within this schedule to enable us to investigate any claims made by applicants and verify them, for the final document we issue them to have integrity. If there are challenges, wait, eventually you will get your passport before your due date of travel if you apply early enough. You will still have long enough time to apply for a visa and other travel documents.

“Nowhere in the world is passport administration done on a wait-and-get basis except in extreme emergencies. The only wait-and-get passport is a passport photograph”, he added.

On the new enhanced passport being rolled out in Ibadan, the minister noted it is an improved document with high-security features.

“The Enhanced e-Passport is a great improvement on the Biometric Passport technology which Nigeria adopted in 2007 as a deliberate step towards curbing forgery, impersonation and other forms of travel document fraud associated with the old Machine-Readable Passport regime. It is the latest technology in passport making anywhere in the world and only a few countries have it. It is the most secure identity document ever produced. We are proud to make it available to Nigerians”, Aregbesola said.

Acting Comptroller General of the Nigeria Immigration Service (NIS), Isah Jere, reiterated the call by the minister for citizens to stop patronising touts.

He said: “We expect that the only time citizens will have contact with our officers is during the biometric capturing. You are to apply and pay only. Soon, we are launching an appointment management system and a tracking system for you to know anywhere you are in the world, the process of your passport application.”

Governor Seyi Makinde, who was represented by his Chief of Staff, Segun Ogunwuyi, lauded the efforts of the Nigeria Immigration Service, saying the state will continue to support the service in performing its statutory duty.

He said the state will soon come knocking on the door of the Minister in its bid to seek an upgrade of the Ibadan airport, noting that such may not be realistic without the effort of the Immigration Service.

Some of the dignitaries at the event include the Alaafin of Oyo, Oba Lamidi Adeyemi; Olubadan of Ibadan, Oba Saliu Adetunji who was represented by Chief Sharafadeen Alli, service commanders, head of paramilitary agencies, traditional rulers, among others.