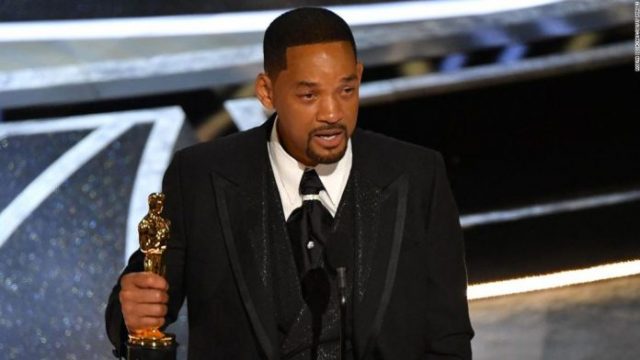 Academy Awards winner, Will Smith has tendered his resignation from the Academy of Motion Picture Arts & Sciences after he assaulted comedian, Chris Rock during Sunday’s Oscars telecast.

This move comes as the actor who won his first Oscar at the 94th edition of the prestigious movie award ceremony, is embroiled in the gravest crisis of his career.

Also the Academy has struggled in its attempts to deal with the fallout from the altercation. From starting an investigation to toying with a possible expulsion or suspension.

In his resignation statement, Smith admitted that his action was shocking, painful and inexcusable, adding that he will accept any additional consequences that the Academy’s Board of Governors deems appropriate.

“The list of those I have hurt is long and includes Chris, his family, many of my dear friends and loved ones, all those in attendance, and global audiences at home,” Smith said.

“I betrayed the trust of the Academy. I deprived other nominees and winners of their opportunity to celebrate and be celebrated for their extraordinary work. I am heartbroken.”

Smith also acknowledged that his actions overshadowed other winners at the Academy Awards.

“I want to put the focus back on those who deserve attention for their achievements and allow the Academy to get back to the incredible work it does to support creativity and artistry in film,” he stated.

“Change takes time and I am committed to doing the work to ensure that I never again allow violence to overtake reason,” he added.

During the ceremony, Smith had charged the stage and slapped Rock during the broadcast for making a joke about the actor’s wife, Jada Pinkett Smith and likening her shaved head to the buzzcut sported by Demi Moore in G.I. Jane. Pinkett Smith suffers from hair loss due to alopecia.

Smith would later first apologise to the Academy for his action as he picked up his award and later to Chris Rock who is refusing to press charges.

After initially offering up a statement that said it did not condone violence, the Academy followed up with two subsequent statements that more forcefully criticized Smith.

On Wednesday, the group said Smith had violated the Academy’s standards of conduct and that he had 15 days to provide a written response explaining his actions. The organization said Smith faced suspension, expulsion or other sanctions.

The Academy’s formal investigation and disciplinary process is still moving forward though, despite his resignation.