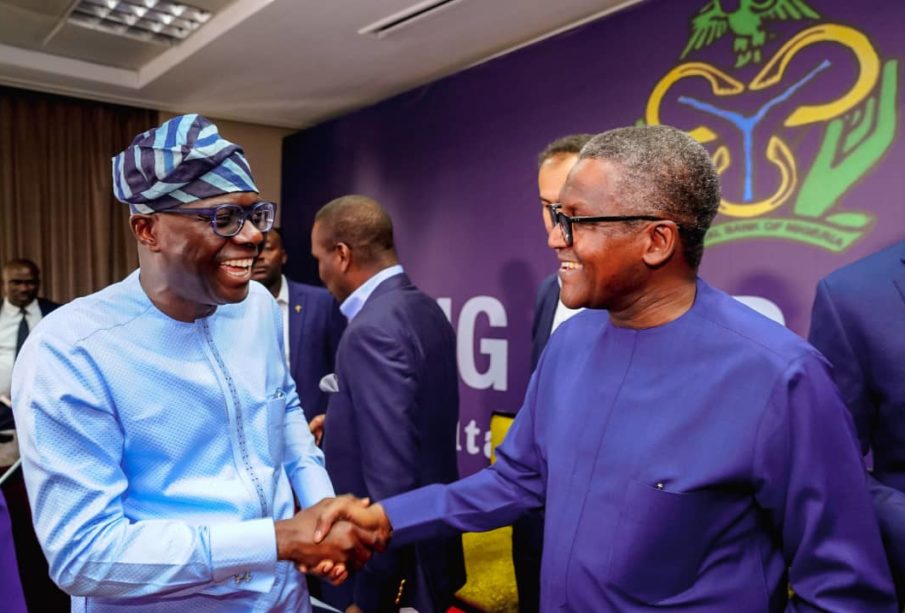 The governor expressed delight over the situation of the biggest investment in the country in Lagos State – the Dangote Oil Refinery and Dangote Fertiliser Complex – and for the positive development which the investments would bring to Lagos and the Nigerian economy.

President of the Dangote Group, Aliko Dangote, on his part thanked the governor for his support and for making Lagos a haven for investors, and said the Dangote Group would do its best to make the Epe axis a hub of industrialisation through job creation and other economic empowerment activities.

The governor, during a facility tour of the Dangote Oil Refinery, Petrochemical Complex, Fertiliser Plant and Subsea Gas Pipeline Projects at Ibeju-Lekki weekend, said the refinery and fertiliser projects would meet the yearnings of Nigerians, and also bring exciting times ahead for government.

The governor, who said he was impressed with the progress of the projects, noted that Dangote had taken into account gender inclusion and secured the future of the youths in the host communities, in Lagos and Nigeria in general. On his part, he pledged to complement the efforts of the Group and boost infrastructure with adequate road networks.

He further thanked Dangote for his investments, and stated that the Lagos state government would create an enabling environment to foster a symbiotic relationship.

To allay the fears of Nigerians, Sanwo-Olu said “for all those who are doubting, the Dangote refinery is activated, the fertiliser plant is activated, and these investments will rejuvenate the entire Ibeju-Lekki-Epe trade corridor.”  The governor said “This is an exciting time for government; fuel shortage will be a thing of the past with the Dangote Refinery.”

He further stated that due to the level of development already seen regarding the refinery and petrochemical plant projects, MDAs of the Lagos state government will be relocating offices to the Lekki corridor, jobs are already being created by the Dangote Refinery and Fertiliser complex, and government can see all these and has to encourage it. “The state government will also ensure that the master plan for the free trade zone is followed”, he added.

Dangote, on his part, noted that even before being commissioned, the Dangote Refinery and Fertiliser projects have created around 20,000 jobs for Nigerians, with the aim to do more.

He said the Dangote Industries Limited appreciates its host communities across the group, and would boost the fishing industry in the Lekki area by providing boats and jobs within the projects to boost local income. He noted that the Group has met and exceeded the expectations of the local community.

He added that in a bid to boost local infrastructure and complement the efforts of government, the Group would begin road construction and rehabilitation in May even before any formal agreement is signed, with the support of the Executive Order, ‘Road Infrastructure Development and Refurbishment Investment Tax Credit Scheme Order 2019 No. 007 of 2019’.

Among the officials who accompanied the governor were the Commissioner for Commerce, Industry & Cooperatives, Dr. (Mrs.) Lola Akande; Special Adviser to the Governor on Commerce & Industry, Mr. Oladele Ajayi, Commissioner for the Environment and Water Resources, Mr. Tunji Bello, and the Chairman, Lekki Free Zone Development Company, Mr. Abiodun Dabir

Burna Boy: So many people prayed I didn’t win a Grammy