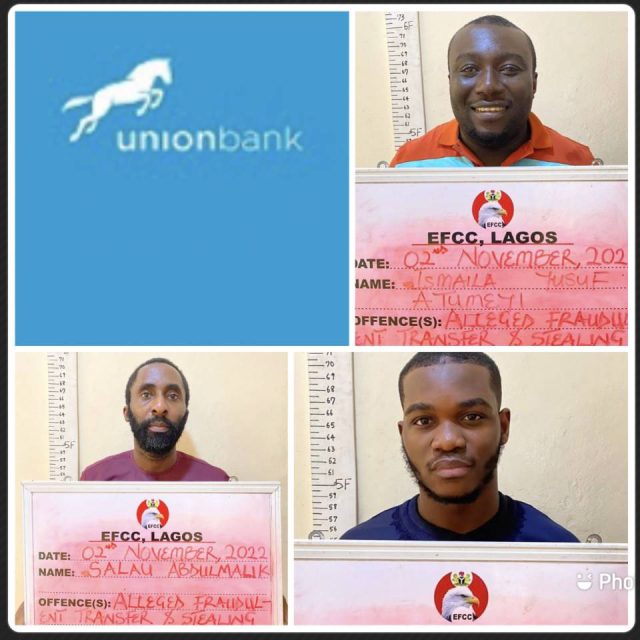 The Economic and Financial Crimes Commission (EFCC) on Monday arraigned a former employee of Union Bank, Abdulmalik Salau, and two others for cybercrime and money laundering involving about N1.403 billion.

The other accused persons are Ismaila Atumeyi and Ngene Dominic. EFCC announced the arrest of the defendants in November.

The anti-graft agency’s spokesperson, Wilson Uwujaren, said in a statement that the trio were arraigned before the trial judge, Tjinani Ringim, of the Federal High Court in Ikoyi, Lagos.
They face 18 charges to which they all pleaded “not guilty” on Monday.

Following their “not guilty” plea, the prosecuting counsel, Rotimi Oyedepo, called for the commencement of their trial, a request he anchored on the provision of section 273 of the Administration of Criminal Justice Act (ACJA).

“Therefore, we will, with all humility, ask your Lordship for the acceleration of this trial. My Lord, Section 300 of the ACJA also expects the prosecution to give a very brief summary of the case it has against the defendants,” the lawyer said.

How defendants allegedly diverted bank’s N1.4billion’
Mr Oyedepo also informed the judge that the prosecution had lined up six witnesses to testify against the defendants.

He said the prosecution would, through the witnesses, show to the court “how the defendants agreed among themselves to hack into the database of Union Bank Plc, transferred funds belonging to the bank and its customers and used the proceeds of this unlawful activity to acquire properties for themselves.”

He added that the prosecution would show how the third defendant, a former member of staff of Union Bank Plc, allegedly worked with the others and “succeeded in hacking into the database of the bank”

He alleged that the defendants, in different instalments, moved over N1.4 billion into the accounts of FAV Oil and Gas Limited and Atus Homes Limited.

“My lord, the case is such that, in its nature, requires the cooperation of both the prosecution and the defence team to see its expeditious determination.

“I, therefore, urge your lordship, pending the determination of the case, to remand the defendants in a correctional facility, where adequately trained personnel will see to their welfare and wellbeing.”

EFCC alleged that part of the offences allegedly committed by the defendant was contrary to and punishable under section 16(1) of the Cybercrimes (Prohibition, Prevention, etc.) Act, 2015.

Another of the offences was also said to violate section 18( a), 15 (2) of the Money Laundering Prohibition Act, 2011, as amended and punishable under section 15(3) of the same Act.

The defendants having pleaded “not guilty” to the charges, Mr Ayorinde said “they are constitutionally and legally under the presumption of innocence until otherwise determined by the court.”

“The prosecution has responded to the application by serving on the first and second defendants a counter filed on 5 December 2022.”

He said in ensuring an expeditious and speedy dispensation of the case, he was prepared to move the application for bail immediately.

The application for bail for the first and second defendants is ready for hearing. The summons for bail is dated November 30, 2022. Since it seeks admission of the defendants to bail in very liberal terms, the grounds of the application are well stated in the summons,” he said.

Mr Ayorinde, who described the offence as bailable, stated that the defendants, “who were arrested and detained as far back as November 1, 2022,” would not jump bail.

He maintained that the “incarceration of the first and second defendants ought not to continue, even if on some terms. Their rights to bail have not been taken away; the charges preferred against them are bailable.”

The third defendant’s lawyer, Babatunde Ogunwo, also denied the allegations levelled against his client and “adopted “wholeheartedly” the argument of Mr Ayorinde.