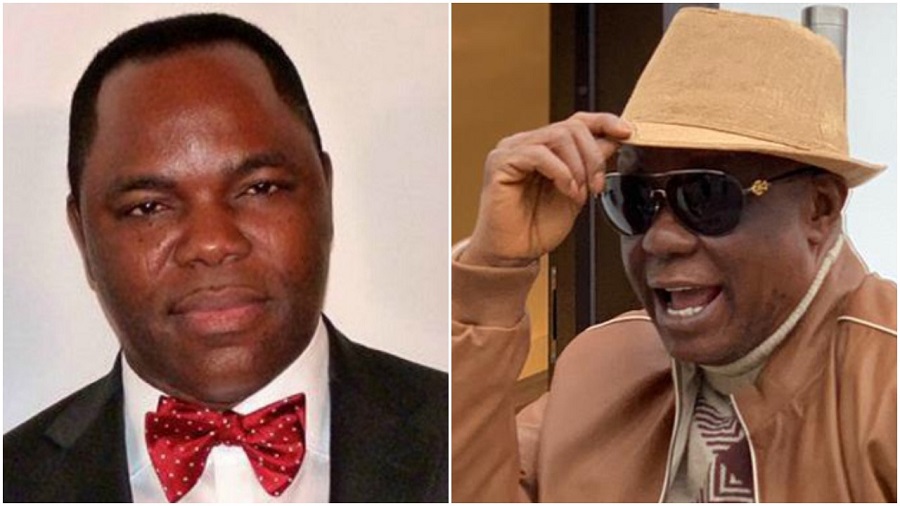 In a recent report by Fact, an online platform, things have fallen apart irredeemably between the two billionaire businessmen over the ownership of OMS limited.

The bone of contention is the claims by the former chairman of Skye Bank Plc that he remains a shareholder at OMS despite documentary evidence showing he sold his shares in 2018. This, sources said, is coming at a time when Okunbo is challenged health-wise and has been receiving treatment in a London hospital for the past three months. Ayeni, it was further reported, is churning out trump petitions and claims that he is still a shareholder in the company.

Before now, theirs was the kind of friendship many would say was made in heaven and consecrated here on earth. Despite their ten year age and ethnic difference, Captain Okunbo, the billionaire behind Ocean Marine Solutions Limited, and Ayeni were like two peas in a pod and business partners.

They rocked the socio-political and economic scenes like emperors. They rocked parties together and wearing same outfits was like second nature to them. They were inseparable and personified the aphorism that sincere friends of this world are as the lights of a ship on a stormy night.

Going by reports from their two privileged camps, the bond that existed between Capt Okunbo and Ayeni may have snapped irredeemably, confirming to the world that indeed, there is a thin line between love and hate. This is the story of how two friends are being torn apart by sheer greed and utter disrespect for the sanctity of friendship. 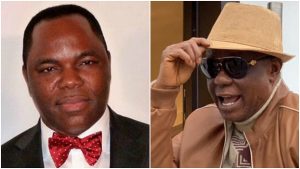 Incorporated in 2008 by Okunbo, OMS, a leading asset protection company dedicated to protecting Nigeria’s natural resources from graft and illegal activities, is also a foremost player in the global maritime industry. As the story goes, Okunbo, perhaps in a bid to expand his company’s operations and solidify his relationship with Ayeni, invited the latter on board and he reportedly snapped up about 35% stake.

However, after Ayeni’s unceremonious ouster from Skye Bank owing to alleged money laundering and mismanagement of funds, Ayeni approached Okunbo that he would like to sell off his shares and cease to be a director of OMS and Okunbo reportedly appealed to him to rescind his decision. But Tunde’s mind was already made up to sell off the shares. Documents show that Ayeni, using his company, Prime Union Investment Limited, specifically on August 15, 2018, agreed to sell his shares including the 175, 000, 000 ordinary shares in GYRO (and the 50, 000, 000 shares held by Mrs Ayeni) to Wells Property Development Company Limited for the total sum of N2bn (Two billion naira).

A special resolution of the board of Prime Union Investment Limited, signed by Ayeni and his wife, Biola, confirmed the sale of shares mid-August 2018. Following this agreement, Capt. Okunbo, on November 26, 2018, duly authorised the transfer of N1billion to Ayeni’s Olutoyl Estate Development and Services Ltd’s Sterling Bank account. The balance was mutually agreed to be paid on a monthly installment.

The board of OMS went ahead to notify the Central Bank of Nigeria, CBN, and the Office of the Vice President per Ayeni’s resignation of his membership of the board of the OMS and its affiliate companies. While acknowledging the agreement in January 2019, the CBN stated, “Please, be informed that the resignation of Dr Ayeni from the board of your company does not in any way affect his liability, or that of Ocean Marine Solutions Limited or any of its subsidiaries/group members, to Skye Bank Plc (now Polaris Bank Limited) and, indeed, any other bank in Nigeria.”

Similarly, on March 1, the Vice President, in an acknowledgement letter titled ‘Re: Notification of Resignation and Share Divestment of Dr Olatunde John Ayeni’ signed by the Deputy Chief of Staff to the President, Ade Ipaye, applauded Capt. Okunbo’s renewed commitment to service in the agricultural, aviation and hospitality sectors of the economy, adding, “Your Company’s disclaimer as regards the said Dr. Ayeni’s activities as chairman of Skye Bank has been duly noted and brought to the attention of His Excellency, the Vice President.”

Interestingly, in a shocking volte-face after collecting his full balance, Ayeni, acutely aware of Okunbo’s illness and ongoing battle to stay alive, reportedly petitioned the EFCC through his lawyer, Femi Falana, SAN, alleging that he sold his shares under duress and, therefore, wants more money. His premise, according to sources privy to the document, was that Okunbo is wealthy enough to pay him more from the company after he had collected the agreed N2billion.

Thus, in a joint statement issued by the board, management and shareholders of OMS, Ayeni’s claims of still being a shareholder of the company were disproved. “Dr Olatunde John Ayeni is no longer a Director of OMS and any of its associated companies having resigned from OMS since August 2018,” the signees posited, adding that he sold and transferred all his shares and interests to Wells Property Development Company Limited for valuable consideration since 2018. 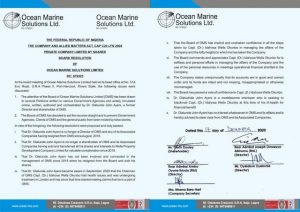 As such, Ayeni, the statement averred further, had not been involved or connected in any way with the management of the OMS since the time he sold his shares and resigned from the board. However, according to the management, when Ayeni became aware in September 2020 that Captain Okunbo had health issues and was undergoing treatment in London, he “has since then started making false claims that he is still a part of OMS.”
Ayeni was also accused of peddling misinformation to the Nigerian Financial Intelligence Unit, NFIU, about the spending in OMS (a company he stopped having any ties with since 2018) without a full understanding of how security companies work in Nigeria. A top official of OMS said, “Ayeni has never been part of management so he never understood how we work. It is like questioning the security vote of a state. All he was interested in was money without caring about the company. The chairman loves Ayeni like a brother and was always there to protect him against all odds not knowing he was the real devil.”

The board of the company, the statement noted, has also passed a vote of confidence on Capt Okunbo but described Ayeni as “a meddlesome interloper who is seeking to blackmail Capt. Idahosa Wells Okunbo at this time of his ill-health for financial benefit.”

Therefore, the company’s stakeholders declared in the statement that they were compelled to issue the disclaimer to set the records straight and to prevent government agencies, clients of OMS and the general public from being misled by Ayeni’s “deliberate misrepresentation of facts” while advising him “to steer clear of OMS and its associated companies.”

People are asking questions why Ayeni always fights his partners and friends over money. You couldn’t have forgotten so soon how his friend and ex-Bond Bank chief, John Darlington, vowed to take him down. In an interview with BusinessDay, Darlington claimed that Ayeni betrayed and repeatedly cheated him of his dues but Ayeni’s apologists argue otherwise, contending that he had always offered a helping hand to Darlington and not the other way round. Also, kinsmen of late Chief Diepreye Solomon Peter Alamieyeseigha under the aegis of the Bayelsa Natives in Nigeria and the Diaspora, B.A.N.N.D, accused him of the same thing. In a widely circulated statement recently, the group said they were aghast that despite all that the former governor did to empower Ayeni, he has only repaid him by maliciously lying on his memory and abandoning his family. 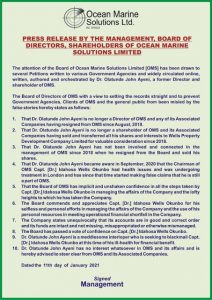 “It came to our notice that when the Economic and Financial Crimes Commission, EFCC, arrested Tunde Ayeni for withdrawing N29billion from Skye Bank, he lied to the agency that he gave the money as a bribe to our brother and illustrious son of the Niger Delta, Chief Diepreye Solomon Peter Alamieyeseigha. That is callous and gratuitous. At no time, as far as we know, did Chief Alamieyeseigha have that amount of money in any bank whether in Nigeria or abroad. He was a simple man of the people who gave back to the society that made him. He coveted no riches and he led a simple life.

“What Tunde Ayeni did was to just lie on a dead man who cannot defend himself. This is a betrayal of the friendship we are aware that they maintained while the former governor was alive. Ayeni merely played to the gallery and decided to call a dog a bad name in order to hang it. This is not what friendship is about. And we have no doubt that the man (the former governor) must be turning in his grave at this deliberate and disdainful desecration of his memory.”

The group declared that its investigations at the EFCC showed that after his initial grandstanding, Ayeni sang like a bird to investigators and went on a lying spree against prominent dead Nigerians including Alamieyeseigha. “He lied that he gave N29billion to Alamieyeseigha as a bribe but we found out that it was part of the money that he diverted to buy NITEL and MTEL which he renamed NTEL. He was using NTEL’s assets to offset his indebtedness to the Assets Management Corporation of Nigeria, AMCON, in a classic case of robbing Peter to pay Paul,” the statement posited.
The B.A.N.N.D further stated that beyond the egregious lie of Ayeni, they were astounded that since Alamieyeseigha’s death, he has turned his back on his benefactor’s family, which it described as “grave sin against man and God. He was never there for the family even when he could have. We are sure that at the appropriate time, representatives of the family will address their grouse with him.” The group further stated that they were not surprised at Ayeni’s capricious about-face; “It is his stock-in-trade. It is why those he calls his friends are wary of having any business or personal dealing with him because there is no atom of loyalty in his veins.”